Samuel Munderere is Solid Minds’ Founder and CEO and has well over a decade of experience of humanitarian work. He first came to Rwanda in 2004 to work for Survivors Fund. Working so closely with genocide survivors took a huge emotional toll. He was so affected by the stories he heard and the people he met that he decided to resign.

Three weeks later, his mother convinced him to return to his job. Samuel had always wanted to be a humanitarian worker, and his mother told him that he could not do what he enjoyed doing in life, yet run away from it. When he returned to work, Survivors Fund provided psychological support to help him to deal with the pressure of the job and to improve his well-being. He is now the director of Survivors Fund.

Samuel was interviewed by The New Times in 2014, during the 20th commemoration of the Genocide Against the Tutsi.  He talked about one of the projects he was working on which provides counselling to women victims of rape, and to children born of rape. Following the publication of the interview, two career women came forward to request therapy, and he realised the need to provide a safe, professional environment. Samuel arranged for the women to receive individual therapy.

This experience, and his own emotional challenges whilst working with survivors, inspired him to co-found Solid Minds with his wife, Ariane Uwamahoro. Samuel holds a bachelor’s with honours in Social Work and a master’s in International Development Management. He has a certification in humanitarian logistics from the Chartered Institute of Transport and Logistics. 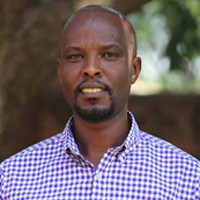